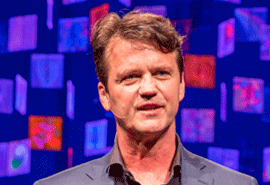 Michael Curry is the owner and President of Michael Curry Design Inc. in Scapoose,
Oregon. He designs and creates live-performance oriented dimensional characters and productions. Audiences worldwide have seen his work in the 1996 and 2002 Olympics opening and closing ceremonies, the 2000 Super Bowl, and New York City’s epoch 2000 Millenium event.

Michael has worked widely in technical development with renowned entertainment companies such as Cirque du Soleil, the Metropolitan Opera, London’s Royal National Theatre, Walt Disney Theatrical, Los Angeles Opera and Universal Studios. He has received coveted awards for his puppet and costume work on The Lion King on Broadway and in Olympic ceremonies, and has been recognized internationally for his pioneering work and creations in the fields of visual effects and puppetry design.

Read more about Michael on our blog.