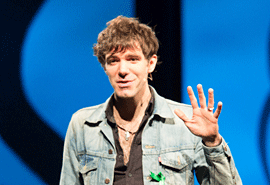 Stephen Kellogg claims that when he was growing up, his musical interests were divided between his father's record collection, devoted to '70s singer/songwriters like Jim Croce and Cat Stevens, and his sister's rock & roll discs, dominated by hair metal acts like Bon Jovi and Mötley Crüe. In a curious way, Kellogg's music represents a meeting point between these two styles, with songs that delve deep into the personal, but make room for a sense of fun, while the music, which is intelligent and intimate, is also full of passion and electricity.

With his long-time band The Sixers on hiatus, Stephen is currently working on a solo album to be released in 2013.

Read more about Stephen on our blog.