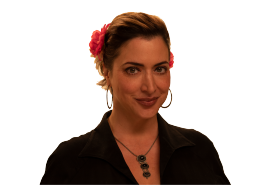 Daria Eliuk is a familiar voice in the Portland, Oregon entertainment world. In addition to her 20-year influence on Portland radio, Daria’s impact can be seen in the fields of television, comedy, commercial work, creative writing, and comedy performance. Her rootedness in the Portland community makes her a sought after EmCee for major events. As an entertainer, Daria has endured as a strong, confident, witty, intelligent, wry, and persuasive female voice. She is considered by poll and press to be Portland’s favorite radio personality. Over the last 20 years at Entercom Communications, Daria broke new ground by showcasing stand-alone daily short story segments. A lifelong, passionate and outspoken Straight LGBTQ ally, Daria is currently writing fantasy fiction for this market. Her storytelling podcast can be found at “Radio Free Daria”. Daria lives in SE Portland with her husband Dallas and their son Xander.