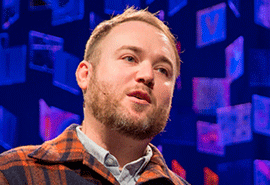 Ryan is co-founder and CEO of Marmoset, a boutique music house based in Portland that crafts original music for story-driven mediums such as film, advertising and television and curates a hand picked roster of indie artists for music licensing opportunities. An Oregon native, Ryan first tapped into his passion for music as a college radio DJ while studying at Southern Oregon University. Since then, he has produced and supervised music for a wide range of projects, including short films, Super Bowl commercials, global ad campaigns and video games. In addition with his work with Marmoset, he manages Timber Carnival Recordings, a Portland based independent record label.

A fiery advocate for artists, Ryan has given talks about the intersection of music and branding at CMJ Music Festival in New York City, SXSW in Austin, and IdeaMensch, and led a panel at the 2013 TechFest NW in Portland, part of MusicFest NW. He was recently named to Portland Business Journal’s 2014 40 Under 40.