As people began filing out of the auditorium after Saturday’s final talk, the fluorescent house lights went up. Crystal Schenk’s art installation, colorfully illuminated from the stage throughout the day, instantly lost some of its magnetic magic; the illusion of the aurora borealis had become a memory. Maybe it’s just me, but since Saturday I’ve been trying to hold on to such memories. My thoughts have been awesomely overrun with the forceful pull of all of the day’s radiant ideas. Snippets of talks recur, ideas new and exciting turn over and over again in my mind, and despite the many times that we were urged to be present, a part of me wants to live in the (recent) past. TEDxConcordiaUPortland (now known as TEDxMtHood)’s 640 attendees will remember how things kicked off with Anis Mojgani’s spoken word performance. 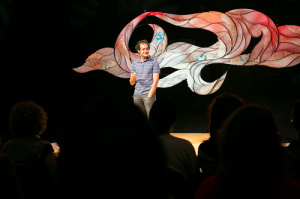 Positive and ethereal—we are all a noble combination of science and magic—his poem resonated with the celestial stage backdrop and solidified the tone for the day. You’ll remember on-stage hosts Jackie and Prashant, and you’ll remember guessing at who would speak at Jefferson’s mystery session (though many suspected that Governor Barbara Roberts might speak when they saw her in attendance). You’ll also remember those other speakers who seemed to have crafted a talk just for you; their ideas corresponded with those you’d been turning over yourself recently. You may have even thanked them during a conversation break, or at the end of the day, or in your Thank You card. And you may have shared meaningful quotes and thoughts: “Passion is a greater indicator to success than IQ.” Speaker Ethan Knight “You cannot be a leader if you are not a risk taker.” Speaker Gov. Barbara Roberts “How does one become a better photographer? Become a better person.” Speaker Taylor Swift “Zombies don’t care about the truth.” Speaker Jesse Laird “Surround yourself with people who challenge you.” Speaker Mark Powers “If you want to get a new idea, you have to get rid of an old one.” Speaker Linda K Johnson “How many times to you shake? Twelve. Why Twelve? Because it’s the biggest number with only one syllable.” Speaker Joe Smith “So many of our treasures, the best parts of us, are found through the hardest times, the worst experiences, the dark days we have and through our deepest fears. Embrace them as they are the foundation of the light and the truths that exist in all of us.” Speaker Cheryl Strayed “I would want to relive TEDxConcordia 2012 if I could. It was fantastic.” Planning Team Member Brian Mariki “How amazing to reflect on how a group of individuals, who might never have gotten to know one another, banded together to plan this event we all believed in and became a big, working ‘machine’ to pull this production off. We’ve become friends out of this. We trusted one another to make this work.” Planning Team Member Brittany Duncan “Thanks for giving me so much to think about.” Attendee Julie Sabatier “It truly inspired me and I felt such a feeling of empowerment after leaving that I felt like I need to pay it forward.” Attendee “Time to focus my passions on my next project to change the world!” Attendee Kirsten Anderson But the event was something more than just these flashes we can recall days later. It was the sum of its parts. When you think back upon the day, you might remember stray quotes from talks, or a melody from one of the incredible performances. 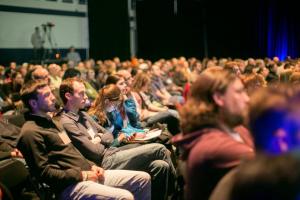 But what arises most clearly is the feeling. The feeling of being wholly absorbed in an idea; of delighting in seeing where a speaker would lead us and what ideas they’d share; of discovering where they’d end up and why. Most importantly, you may remember the feeling of connection. Of quietly breathing next to someone or holding their hand during a talk; of knowing that people in the room are thinking almost the exact same thing you are thinking; of finding other open minds who are similarly open to learning about new ideas. So now for the challenge: Resist the urge to think of this day as only a memory. Use the thoughts and ideas and inspiration and connections you were a part of, and do something with them. Take them out into the world. We all can’t wait to see what happens.