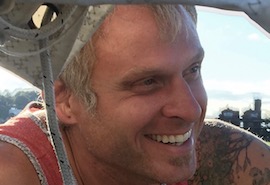 Chad 'Fez' Gaetz is a Portland, Oregon-based artist best known for his large scale interactive works. He has created his own niche designing sculptures and environments which amplify natural forms. His favorite media include steel, lumber, fabric, rigging and LED illumination.

During his years as an expedition leader in Antarctica, he developed an awe for the natural form which shapes his artistic instincts to the present. As the son of a builder and a florist, and student of ice forms in polar regions, it is only natural that he became a builder of giant flower sculptures as big as icebergs.

As the founder of Alchemy Arts Collective, Fez and his creative team are recognized internationally. His sculptures have been featured at Arts, Music, and Cultural Festivals including Bumbershoot, Electric Daisy Carnival, and the Bioneers Conference. He is also regularly commissioned to collaborate with other international artists to design and build stage & recreational environments.