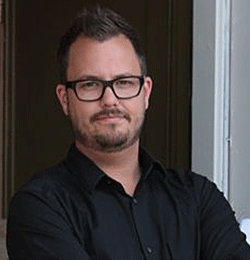 At the heart of Oregon Public House is the mantra, “Have a pint, change the world,” also known as “aletrusim.” The Woodlawn neighborhood pub opened in May 2013, donating all of its profits to local charities of the customer’s choice. It’s even watched over by a mural of the patron saint of giving, St. Nicholas.

Native Portlander Ryan Saari is a pastor by day and volunteer pub director by night. Noting Portland has more brew pubs and nonprofit organizations per capita than any other American city—that in an economic downturn, charitable giving decreases while alcohol sales increase—Ryan and his friends embarked on a three-year journey creating Oregon Public House.

The idea for the nonprofit pub began at a Woodlawn neighborhood barbecue in 2010. A pastor with a love for IPAs, Ryan asked his friends, “Why not combine two of Portland’s greatest strengths?”

A senior pastor for The Oregon Community, a nondenominational neighborhood church that worships in the pub’s adjoining Village Ballroom, Ryan and his church had a goal for the space to serve as a family friendly community hub—a nonprofit business that would support other local nonprofits.

Ryan has likened Oregon Public House’s opening to the three-year birthing of a baby, with $100,000 of fundraising and $150,000 of donated materials and labor. By starting debt-free the pub could immediately launch into donating. It took two years longer than expected, and Ryan joked that he was starting to miss his wife and daughter, but his vision finally came to fruition last spring. 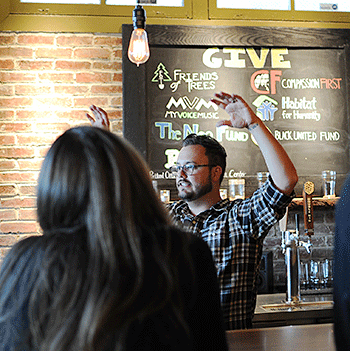 Now, neighbors can buy a $5 microbrew and feel the more positive hangover of knowing their money—about $1 a beer—will plant trees in Portland, help survivors of sex trafficking and benefit other causes of the patron’s choosing. Ryan invites skeptics or naysayers to take a look at the pub’s books, which are open for checking.

After paying its bills and several full-time staff members for running the kitchen and pub, all of The Public House’s net profits are given to charities. Right now they include Friends of the Children, Friends of Trees, My Voice Music, The NEO Fund, POIC, Compassion First, Habitat for Humanity and Black United Fund.

Ryan says the idea and possibility that organizations such as Oregon Public House could change the way nonprofits and donors think about and support charitable works quickens his pulse. “To me, it’s about attentiveness,” he says of this year TEDxConcordiaUPortland (now known as TEDxMtHood) theme, “pulse.” “It’s listening to what’s happening. Hearing from the community and learning from it.”

Instead of focusing on political causes, the brewpub’s partner organizations cover a broad swath of social justice, community and environmental causes. Along with the beer and food menu featuring local brews and fare, patrons peruse a third menu featuring a rotating list of up to 10 charities.

Besides raising funds for nonprofits, pub board members have a goal for The Oregon Public House to educate the community about their partner organizations and ways they can become involved. In its first two weeks, the brewpub donated more than $2,000 to its partner organizations. The board of directors expects its will eventually give up to $100,000 a year to the charities.

If he could harness the pulse and energy of the 700 TEDxConcordiaUPortland (now known as TEDxMtHood) attendees in the room, Ryan’s request would be simple: go out and change the world.

Attendees could start right in the Woodlawn neighborhood, sitting down for a burger and brew or volunteering to help serve, host, bartend, bus tables and work in the pub. By renting The Village Ballroom, the community can help offset the brewpub’s facility costs.

Eventually, Ryan said the pub plans to open an in-house brewery, bottling Oregon Public House beers, with each brew dedicated to a certain cause. He has joked the nonprofit brewpub is an idea he wants other people to steal.

We look forward to hearing how Ryan helped create a community center for action and change when he speaks at our May 3rd TEDxConcordiaUPortland (now known as TEDxMtHood) event. 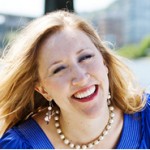