Why Portland Matters to Me – Why It Will Always Matter by Rukaiyah Adams
Category: 2016 Event, Speaker Announcements 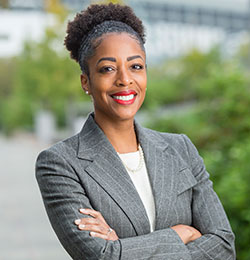 — TEDxMtHood is honored to introduce Rukaiyah Adams as one of our 2016 speakers. —

I often imagine my Great Grandmother as I run across across the Steel Bridge in the Spring. I wonder what she witnessed in her first gaze from the Albina neighborhood upon downtown Portland all those years ago. Were the cargo ships, being loaded with haste on the east bank of the Willamette River, blocking her view? Could she make out the brick stack of Henry Weinhard’s brewery in the garment district? Could she smell the freshly-baked bread from Franz’ Bakery? I’ll never be sure of those details – but this I know for certain: despite the newness and what must have been terrifying uncertainty, she and her family were here to stay. All of us.

She was a mature woman in her 60s when she led our family to Oregon from the Jim Crow South. We came during the Great Migration, the largest voluntary migration in human history. When I was young, I always thought the timing was puzzling. Why would everyone leave the South just as the Civil Rights Movement was gaining momentum? It’s hard to imagine that, given the choice between participating in transformational protest and abandoning the South, they chose to leave. But now I see that leaving was an equally radical, but quiet, form of protest. One that would take decades to be understood by the rest of us.

After my Great Grandmother died, I came across pages upon pages of secular aspirations that she’d written over the printed pages of her Bible, as if it were a journal. She was direct and funny and brave. One piece that stuck with me expressed a hope that, at some point, her children would have access to good education, clean air, meaningful work, and would “take care of each other.” The first time I read that statement, I was awestruck and wowed. For a woman who lived most of her life so proximate to the trauma, violence, and deprivation of slavery and segregation, her perspective was so humane. So visionary. So radical in its tenderness.

It has taken me a long time to understand that aspiration in context. Reflecting on the word and meaning of Endeavor, the theme of this year’s TEDxMtHood event, has brought me clarity about my role in my Great Grandmother’s perspective: if I only endeavor to do one thing in all of my life, it will be to actualize her vision – to be a visible tribute to the quiet, radical protest that she started by moving her family to this beautiful place to begin anew, to be free.

I look forward to telling this story at TEDx about a time I had to muster the courage to step joyfully, fully and powerfully into my black self; about how, in moments of confusion about the consequences of being whole, I revert to her bravery and optimism. And, when I run across the Steel Bridge in the Spring, thinking about my Great Grandmother, it brings me back to why this place matters to me – why it will always matter. My Oregon story is one that is deeply entwined with black history, and black freedom. It is also a feminist story. Imagine that. 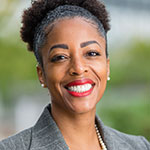 Rukaiyah Adams is the Chief Investment Officer at Meyer Memorial Trust. Her job is to ensure the long-term strength of the organization. But, Rukaiyah is not a typical investor. She pushes for transformation in finance that will require radical transparency and broader views on cost, risk and return that take into consideration impact on many stakeholders. Before joining Meyer, she ran the $6.5 Billion capital markets fund at The Standard. She is the Vice Chair of the Oregon Investment Council, which oversees approximately $90 Billion for the State of Oregon and PERS. Rukaiyah holds a BA with academic distinction from Carleton College and a Juris Doctorate from Stanford Law School, where she served on the Law and Policy Review and as Co-President of the Law Student Association. She also has an MBA from the Stanford Graduate School of Business.