The TEDxConcordiaUPortland (now known as TEDxMtHood) planning team is delighted to present our logo for the 2014 theme, Pulse. And we’re even happier to announce that it came from right here, within our very own team.

Each year we have partnered with designers who create imagery for the event that corresponds with the theme, but this year’s designer, Dianne Foster, had her finger on the “pulse” from the beginning. When the planning team explores theme options, we mull over meanings, iterations, and all of the possible ways a single word or phrase might shape the event. It’s a complicated bit of collective thinking, and as an active team member, Dianne synthesized it all, focusing on expressing the theme, Pulse, in an interesting graphic way.

Dianne joined the planning team in 2012 after attending both the 2011 and 2012 events. She loves all things TED and TEDx, and she was thrilled to learn that passionate community members can become a part of the planning process. After playing numerous other roles on the team, she gladly accepted the challenge of designing the logo and branding for 2014. Not only did it provide a new opportunity to serve the team, but it also allowed her to put her professional skills to use. Dianne has worked in the print and graphic design industry for over twenty years, and in 2005 she started her own business, paisley arts, after a successful battle against cancer left her wanting more outlets for creativity and more contact with clients.

To create the logo, Dianne used creative strategies familiar to her. She spent a lot of time thinking about the team and all of the discussions that took place about the theme, and then she scoured the internet for inspiration—words, images, iconography, logos, fonts. In short, anything with a potential connection. She avoided obvious connotations with the word pulse. What came to mind instead was energy and the way even a single change can create waves that ripple outward. She thought of the way water ripples when disturbed, how the rings spread out and converge before finally coming back to a state of rest. She also thought not about a heartbeat, but about how it is represented on a monitor as a pulsing signal. The finalized logo represents all of these ideas, reflecting the various ways ideas can pulse and give shape to a community. 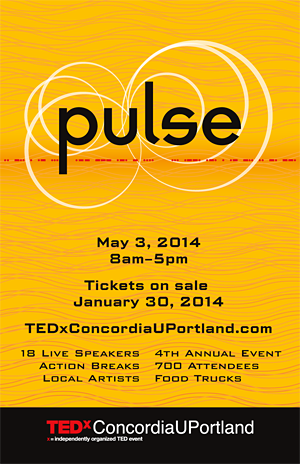 Look for the Pulse logo around town in coming weeks, and on May 3, 2014, be a part of the pulse at TEDxConcordiaUPortland (now known as TEDxMtHood).

Breathe. Expand your chest and fill your lungs with air before letting it out, back into the environment around you. Even though you can’t see it, oxygen fills the space around your body. You take it in, and it sustains you. In every moment the rise and fall of your breath accompanies the beat of your heart, the rhythm of life that thumps and rests, pulsing in cadence to your own personal song. If you followed the path the air takes through your body, you’d travel thousands of miles a day, relentlessly venturing to far-flung toes and fingers before returning, exhausted, ready to be renewed again. The cycle never stops. Even while you sleep, these circulatory adventures persist, keeping you alive, because the system is automatic and intuitive, an effortless network.

Listen. In the quiet moments between actions, we sense what might be possible. We remember ideas long forgotten, we revise what we thought we knew, and we realize the answer to the problem was always right there, waiting. Silence, some say, is the canvas that music is painted on. The calm space between sounds is like the negative space in a sculpture, the areas inside and around what the artist wants you to see, areas that give the work shape, defining and delineating it. Without space, a sculpture would be a block; a symphony, a constant hum. The wise musician slips between the breaks, invisibly mastering the silences. Between notes, breathe. Between words, pause.

Pulse. Communicate the rhythm that you sense, the energy about to rise up and become a force for positive change. Cast your idea out into the water and watch it break the surface; while it sinks in, its force ripples out in ever-widening circles. It’s hard to put a finger on it, but you know what it feels like when you watch those circles disappear, absorbed back into the larger whole. Discover how to create waves and envision the troughs and crests. Listen and watch, and when the silence has passed and the air is vibrating with the energy of countless people, together, raise your voice. You have something to say that is worth hearing, and we want to listen. As a community, we hold something in common. We commune and communicate, which is another way of saying we share. We share the air we breathe, we share the silences, and we share a desire to do things better, to take more time, to care, to change, and to pulse.