TEDxMtHood is delighted to announce a surprise new addition to our lineup… Portland, Inc. creators Pippin Beard and Kristen Kingsbury will join us on June 18!

The upcoming feature-length documentary captures the sleepy charm of Portland’s past as it becomes one of the fastest-growing cities, and explores what that means for residents and the city as a whole. In their own words, Portland, Inc. “explores the charm of the past to extract what worked in an effort to reinvent the future of our renowned livable city.”

Pippin and Kristen started developing the film through interviewing a dear friend, Bing Sheldon, that had been instrumental in the city’s planning in the 1970’s, and spurring their passion for the subject. The couple have been interviewing city planners, activists, artisans, architects and even street icons like the Unipiper for over two years and just wrapped production.

TEDxMtHood is excited to have these two join our onstage host for a conversation about the film and our great city. We’ll also get to see exclusive clips from the film which is slated to debut in November of this year. 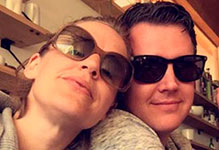 Husband and wife filmmaker duo, Pippin Beard and Kristen Kingsbury, have been creating together for the last decade. Pippin, a camera toting Oregonian, is equipped with endless energy and the non-stop pursuit of optimism. This includes getting that impossible shot and the improbable interview. Kristen, a New York transplant who moved here to work on Coraline, has a knack for telling challenging, outrageous stories. They’ve combined their talents and ceaseless energy to tell the most compelling and timely tale imaginable in the film Portland, Inc. – the story on Portland as it faces its own endeavor: change. They have conducted more than 40 interviews, bringing Portland’s paramount voices under one lens to explore the past; to look critically at what’s happening now as our city faces rapid transformation; to examine the result when equity is dropped from the city livability conversation; and to seek the answer: Is the future that’s being designed for us, good enough?