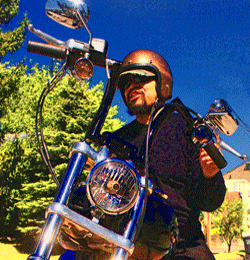 Hip-hop has always been about change. The constant influx of “the new” drives the genre, leading to creatively poetic rhymes, varied subject matter, humorous boasts, and innovative beats. Drum breaks from 60’s and 70’s funk and soul records laid the foundation for today’s combination of samplers, drum machines, and production software. Producers and emcees honor the past while reconfiguring it, referencing the old in sometimes unrecognizable ways while offering fresh, unique lyrical perspectives. Even the slang changes—fresh, wack, dope, weak, bangin’—as soon as they catch on, the words become passé.

Poet and emcee Mic Crenshaw understands the power of change and how it drives him to relentlessly create. Born and raised in Chicago, Mic moved to Minneapolis when he was a young man and fell in love with music. He also found himself responding to the violence around him. Groups of white supremacists, a growing part of the Minneapolis hardcore music scene, attempted to dominate parks and public spaces, so Mic and his friends began confronting them. Eventually he escaped the violence by moving to Portland, where he became an integral part of a budding local hip-hop scene.

As Mic began honing his craft, he quickly learned that hard work and passion led to success.

“Follow your heart no matter what, but learn how to have fun being practical. Get the hard stuff out of the way first.”

In 2001, Mic won the Portland Poetry Slam Championship, and he finished that year as a national finalist. The Portland Mercury called him one of the city’s best hip-hop acts, and when he released his first solo album, Thinking Out Loud, in 2009, it received widespread acclaim. Billboard called the album “a collective of juicy jams and skillful rhymes,” stating that it was time Mic “garnered critical mass to spread his positivity to the world at large.”

Mic released a second album, Under the Sun, in 2010, and he is currently working on a new collection of songs. Music continues to be a passion in his life, yet a trip to a Human Rights conference in Rwanda put him on the path towards what he says is the culmination of his life’s work: global activism.

Mic’s lyrics and poems have always been described as socially conscious. In a recent single featuring Dead Prez, Mic writes about the need for community members to be their own superheroes, rising up to take action and inspire others. He admires how artists like Stic man of Dead Prez and Boots Riley of The Coup continue to innovate within hip-hop while remaining socially conscious, and his own activism has led to a realization: the greatest changes he can effect can take place in countries where people lack resources like computers.

In 2007, Mic and educational colleague Morgan Delaney created GlobalFam, which soon partnered with Education Without Borders (EWOB). Together they have obtained computers for over 800 people, creating a computer center in Burundi, Central Africa that trains community members and offers computer repair services. Mic now serves as EWOB’s president, and in 2013 he began touring with Afrikan Hip-Hop Caravan. The group visited ten cities, from Cape Town to Cairo, playing shows, offering symposiums, free shows for youth, and spreading the messages of hope and change through music.

When told of this year’s theme, Pulse, thoughts immediately came to Mic’s mind. “To me it means the rhythm of life ascending and descending, increasing and decreasing in speed and intensity, sometimes—often—simultaneously. Excitement, desolation, ebb and flow, life and death, consciousness and movement, solitude and stillness.”

Come hear Mic speak from the 2014 TEDxConcordiaUPortland (now known as TEDxMtHood) stage about all of the ways he has harnessed the pulse of his community to inspire global change.