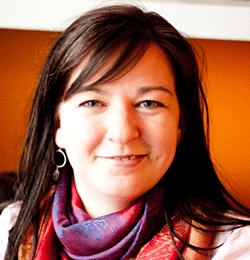 Less than a decade after declaring her desire to be an artist, Jolie Guillebeau completed her 1,000th painting. She reached that milestone earlier this month. Now she’s moving on to the next thousand pieces of art. This time, though, she only has until May 3rd to complete them.

Jolie is the official Artist in Residence for the 2014 TEDxConcordiaUPortland (now known as TEDxMtHood) event. That means that she will be creating the art installation that serves as the backdrop to the stage on event day. She will also give a talk about the installation, telling the story of how it came to be.

Fortunately for Jolie, she knows what the process of creating the installation for this event looks like. Last year she helped her friend Rebecca Shapiro fill the role of Artist in Residence (she even helped pick out her wardrobe for event day), whose talk you can watch here. This year the roles have been reversed—Rebecca is in the supporting role as Jolie sets the tone for the stage with her art and her talk. That mutually supportive dynamic has existed between the two Portland artists since they first met when Jolie moved to Portland 5 years ago.

Even if that history didn’t exist between the two, Rebecca’s support would still be there. One component of the Artist in Residence program is connecting the previous year’s artist to the current artist. In addition to creating a system that results in a beautiful installation for event day, the program also helps to build community among local artists. Those relationships continue on after the event. So too does the art—the installation from 2011, created by Blaine Fontana, is currently on display at The Rebuilding Center, and Rebecca’s piece from last year just completed a six-month stint in Concourse E of the Portland airport. Who knows, maybe a future Artist in Residence walked by that installation upon their arrival to Portland?

Before her move to Portland, Jolie lived in Seattle, where she attended Gage Academy, an art school that provides classical training for contemporary artists. After graduating from that program, Jolie took a systematic approach to her development as an artist—each weekday she created a new painting. “I believe in creating something every single day,” she said. “There is power and truth in creating stuff.” At the beginning of her daily painting project, Jolie wasn’t comfortable calling herself an artist. Now, after 1,000 paintings, she is.

Jolie structured her daily painting into groups that allowed her to focus on one genre at a time: she would paint 100 stills in a row, then 100 landscapes, then 100 portraits, then 100 abstracts. Often her intention with those groups was to scratch out any voices of doubt that she heard related to her abilities as an artist (be they from overly-critical professors or the ever-present internal critic).

Jolie’s daily approach to painting embodies the best advice that she never got: “Tiny actions add up to big results. You can make big changes bit by bit by bit. Get started.”

Early on in her mission to create a painting each weekday, Jolie realized that of equal importance to the finished painting is the story behind it. The story could be about the motivation behind the painting (i.e. get better at abstract painting), it could be about the object or scene depicted in the painting (Jolie enjoys drawing objects that brought her joy as a child—Mr. Potato Head has made multiple appearances), or it could be about the process of creation itself and what was learned from that process. Jolie writes stories to accompany her art as a way to build the connection between herself as the artist and those who view her art.

Jolie is bringing the knowledge gained from her 1,000 paintings to the process of creating the art installation for this year’s event. Jolie is creating 1,000 new paintings, made on 4×4 inch or 5×5 inch pieces of plexiglass. Each of those paintings will hang from one of two cross-bars for a beaded curtain feel to the stage backdrop.

In contrast to the deliberate approach to her first thousand paintings, Jolie is taking a more organic approach to the second thousand. Rather than focusing on the overall composition of each piece, she is paying attention to the individual lines and curves and letting the paint flow without too much thought about how any individual piece will turn out. Only when she combines the thousand pieces of art will we see the bigger picture.

When Jolie thinks of the term pulse, she imagines the many heartbeats that, over time, combine to make a life. Her art installation will give physical form to that idea—the thousand new paintings will combine to become one work of art.

And like all of her paintings, this new work of art will have a story behind it. To hear Jolie tell that story, and to see the work that inspired it, come join us on event day. 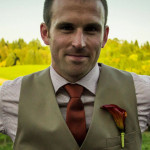