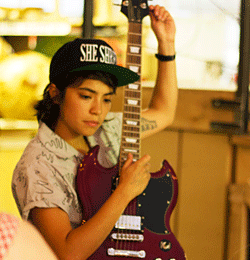 I have never played guitar.

Even on Guitar Hero, I’ve always beautifully sucked. I call it beautifully sucking because it’s still fun to do something you’re not super great or experienced at doing, especially when the people you’re jamming with are enjoying the hell out of themselves.

So, why show up to the TEDxConcordiaUPortland (now known as TEDxMtHood) Adventure on Friday, May 3rd, 2013, when it was geared specifically toward guitar maintenance? Simple: it’s totally awesome being in the company of people who are passionate about what they do (and if you’re involved with TEDx in any capacity, you’re going to find that). It was obvious that the teachers, the girls, and all of the people involved with the Rock ‘n’ Roll Camp for Girls are passionate about female empowerment. Watching the teachers move from girl to girl, guitar to guitar, it is obvious that they want girls to succeed on their own terms, whether it’s by rocking out on a guitar that she has learned to repair by herself or by using her voice to express herself authentically, to collaborate with others to create a kickass song or a badass magazine, like Portland’s own She Shreds. 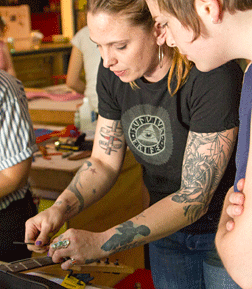 The camaraderie was evident in this small space. The girls laughed, helped one another, and shared stories as they worked on their respective guitars, (mostly) not minding that I took pictures of them as they did so. The night ended with a performance by two of the girls from the camp in a jam session on the drums. (One lucky dude even caught the end of their performance as he jogged past the open garage door at ADX and stuck around for the remainder of the show, clapping enthusiastically when they finished the set.) The passion that these girls felt for their music was evident, palpable, and totally inspiring, which fit right in line with TEDxConcordiaUPortland (now known as TEDxMtHood)’s desire to collaborate with the Rock ‘n’ Roll Camp for Girls and She Shreds.

The most inspiring thing about this adventure was getting to be a part of how music, community, and passion created a space that was safe for each individual to explore ways to groove in the world. “Even though we’re a rock and roll camp,” Beth Wooten, Executive Director of the Rock ‘n’ Roll Camp for Girls, told me, “teaching music is one fifth of what we actually do.” The organization—like TEDx events, speakers, planners, and attendees—is interested in working with the girls, specifically to inspire. Collaborate. Express. Create. When people come together to authentically do these things, some pretty awesome shit can be written, can happen, can be enjoyed together in the company of those who dig it, too.

It doesn’t matter if you’ve never played guitar, lived in a tiny house, or sung with a bunch of strangers, all of which have been opportunities for connecting with TEDxConcordiaUPortland (now known as TEDxMtHood). What matters is that you show up, make awesome stuff in a way that feels authentic to you, and teach and learn from others. 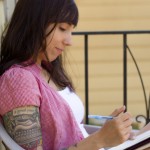