Announcing Our Next Round of TEDxConcordiaUPortland 2012 Speakers: A Thinker, a Drummer, and an Educator
Category: 2012 Event, News, Speaker Announcements

This week we have a little riddle for you: What will generate over thirty minutes’ worth of incredible talks and a lifetime of memories, but makes 168 hours seem like only yesterday? The announcement of our next three speakers! That’s right, another week has passed and another group of speakers is waiting in the wings, ready to be announced and added to our illustrious, exciting, and extraordinary list. Like all of our speakers, these three have been hand-picked for their extraordinary stories and accomplishments. We look forward to hearing them share the talk of their lives on March 31st. So let’s get on with it! We’re pleased to announce three more speakers who will be taking the stage at TEDxConcordiaUPortland (now known as TEDxMtHood) 2012: Nathan Schmitt 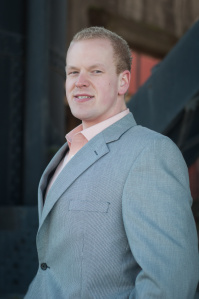 What is the purpose of an education? This is a question Nathan Schmitt has spent a lot of time pondering. If it is to learn to think for yourself and approach the world with a questioning attitude, he’s well on his way. Schmitt was homeschooled by his mother through high school and she taught him how to think critically about the world and how to make a difference in society. He’s now a student at Concordia University, but lately he wonders what our current academic culture is preparing us for. ”The information taught in schools and read by an individual person is basically incomplete knowledge if what they read is not followed by hands-on action.” Ambitious and competitive, Nathan is a driven and successful student; however, he knows that this isn’t enough. He thinks more time should be spent acquiring situational knowledge. Though they provide a meaningful foundation, he thinks there’s only so much you can learn from books and theories. Instead, students should be getting “real, tangible experience” so they can gain experience and build industry relationship. He’d like to see theory and praxis balanced in education, and he’s crafted a 50/50 rule that speaks to this idea worth spreading. Nathan is in the midst of building his own business and he plans to write a book. Ideally he’d like to get involved in the leadership of his community and country. Come see him discuss his ideas for change on March 31st. Mark Powers 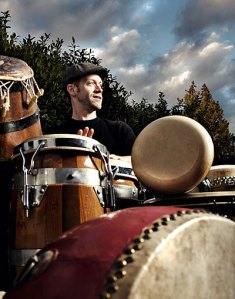 Drum roll, please. And hold…for twelve hours! Mark Powers, percussion artist, teacher, and writer, once co-held the Guinness Book of World Records title for longest continuous drum roll (2003-2005). He admits that it’s a silly claim to fame, but it does show this adventurous world-traveling musician’s devotion to rhythm. “Percussion has held such an integral role in cultures around the globe for centuries and rhythm is something that each one of us possesses within. My goal is to harness its power and potential, using it for community building, wellness and personal growth.” Knowing early in life that he loved percussion, Mark began studying drumset performance at age 16 after an accelerated high school graduation. Over the years, he’s studied with countless percussion luminaries in the U.S. and abroad. He’s performed and absorbed the rhythms from Puerto Rico, Cuba, China, Thailand, Canada, Ghana and Uganda. Through it all, he’s met, performed, and recorded with a variety of people.  He finds that his ever-widening circle of friends constantly inspires him. “I am continually aware of many people doing so many great things for themselves and others. I can’t help but see their ideas and actions and ask myself, “’hmm . . . how could a drummer apply that?’” When he’s not traveling or performing, Mark teaches private lessons, classes, and workshops. In teaching people the rhythms he’s mastered, he uses music to touch people’s lives. In some cases, it even helps to heal—he teaches at Riverfront Wellness Center and he presents percussion-based Correctional Education programs in adult and juvenile facilities. Soon after Mark shares his passion for percussion on the stage at TEDxConcordiaUPortland (now known as TEDxMtHood), he’s travelling to Kuwait City, where he’ll be artist in residence for two weeks at an international school. Then he’s off to the South Pacific to perform for four months. Catch him while he’s still here and prepare to be moved by his rhythmic expertise! Jesse Laird When asked what he’d do if he could harness the energy of all today’s attendees, Jesse Laird immediately knew the answer. “Easy. I would have them create a massive free university whose sole purpose would be (will be? is already?) to facilitate the intellectual, spiritual, and psychic liberation of all human beings, by and for their own power, to live meaningfully in harmonious community with all living creatures throughout the Universe.” Jesse Laird knows education, and he also knows about change. He teaches Humanities at Concordia University and is a doctoral candidate in Human Rights Education at the University of San Francisco. Since 2002, he has marched-on, taught-in, walked-out, blockaded, occupied, obstructed, and strategized in dozens of nonviolent campaigns. At Concordia, he teaches Peace Studies, Global Diversity, Speech, and Ethics. Jesse facilitates regular workshops in strategic nonviolent action through Our School, a Portland activist education collective. His publications include case studies of nonviolent social movements and he has recently lectured and presented on activist themes at numerous universities and organizations in California and Oregon. He says that he would someday like to become more balanced. For some people, this might not be a concern; however, for someone who’s devoted his time to studying the balance and imbalance of power in governments and institutions, the idea of achieving that ideal state of equality and equilibrium is probably one that is ever-present. Without a doubt this is another exciting group of speakers! Look for our next group to be announced next Saturday, March 3rd.