Hoorah! Our first round of speaker announcements is finally here! Kick up your heels and give a jubilant jump because they’re all extraordinary people who have amazingly inspirational stories to tell. We’re incredibly excited (Can you tell?) to have them speak at TEDxConcordiaUPortland (now known as TEDxMtHood) on March 31st, and we can’t wait to hear them share and reveal things that the audience will remember forever. The planning team chose each speaker with great care and deliberation and we feel that each one is an exemplary example of our definition of Becoming Extraordinary. So, it is with great pride that we announce three of the speakers who will appear on stage at TEDxConcordiaUPortland (now known as TEDxMtHood) 2012. Cheryl Strayed 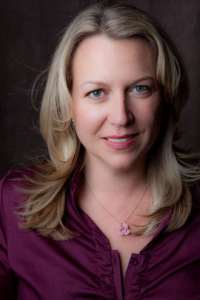 The writing of award-winning author Cheryl Strayed has been described as courageous, gritty, elegant, precise, smart, funny, and sublime. She’s a writer of both fiction and non-fiction, having written the critically acclaimed novel Torch, as well as articles for The New York Times Magazine, The Washington Post Magazine, Allure, Self, and many others. Most recently, however, she’s been in the spotlight for her upcoming memoir, Wild, which is about her 1,100 mile solo journey along the Pacific Crest Trail. She walked the trail seeking forgiveness and hoping to find her “innocent self” again, yet what began as an “idea, vague and outlandish and full of promise,” became something much greater. Through this journey, she found transcendence, hope, and healing. She confronted the wild and she confronted herself, ultimately finding the extraordinary in those things that we so often take for granted. Cheryl currently lives in Portland, Oregon where even indoors she continues to find meaning. Like her mother before her, she seems to “bring magic into every day.” For instance, when we asked her what she believes is the most extraordinary place in the world, she had this to say:   “My bed at six-thirty in the morning, after my two children have crammed themselves in beside me and my husband and our cat, Gulla. Because real, live, wild love is there. And what’s more extraordinary than that?” Wild comes out in March 2012, and Cheryl recently revealed her role in another writing project–She’s Sugar, celebrated (previously) anonymous advice columnist for the Rumpus web site. Beyond this Cheryl plans to continue growing as an artist.  Her hope is that her next book “always reaches further, dives deeper, and risks bolder than the one that came before it.” Anis Mojgani 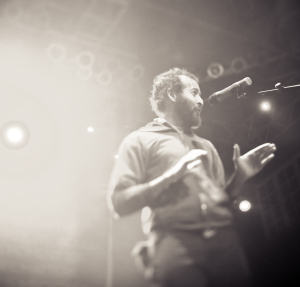 You might not believe it, but Anis Mojgani has never been to a barber shop. And he has really long arms. Oh yeah, and he’s also a two time National Poetry Slam Champion, winner of the International World Cup Poetry Slam, and a National Book Award Nominee along with various other extraordinary accomplishments. He is a talented and creative artist, who has long been fascinated with the extraordinary process of being human. Everyone, he believes, is “invested with nobility,” and this is an idea that he constantly carries with him. His beliefs shape him, and he says that his parents helped shape his beliefs. They gave him, as he says, “The permission to be oneself, acceptance of who one is.” If he were able to harness the power of our 2012 attendees, he says he’d want to send everyone out into the world with homemade inventions to make the world a better and more interesting place. One invention he’d like to see? Levitating shoes. He’d love to own a pair someday. He’d also like to open a bookstore, start a soda pop shop with his wife, and establish “an organization that brought to fruition the creative wanderings of people that do not liken themselves to being creative individuals.” We should probably mention—it might already be clear—that he doesn’t believe there’s ever one place that we arrive at; there’s no end point, so there’s no opportunity to rest on one’s laurels. His goal in life is to simply continue, something that he says is actually quite difficult. Continuing takes patience and it’s often a process of balancing being selfish and selfless. We’re excited to see him continue on the TEDxConcordiaUPortland (now known as TEDxMtHood) stage, where his slam talents and creativity will be welcomed with open arms. Goodnight Billygoat 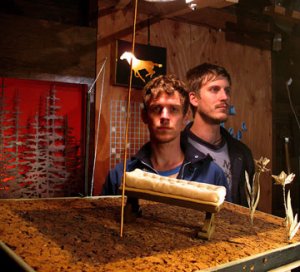 There’s an air of modesty to David Klein’s description of what his performance art group Goodnight Billygoat does: “Think of the old silent films where someone’s playing a piano and there’s a film above showing a narrative. But there’s a little more equipment, and there’s color.” Audiences often encounter much more. Think of being transported into an old silent movie theater like Klein mentions and quickly realizing that you’re actually in a dream; what you see on the stage is mesmerizing and mysterious and beautiful, and you find yourself contemplating the cosmos as you listen to a live band shape their music to the scenes. Klein began Billygoat as a solo project in 2006, combining stop-motion animation and ambient music. Nick Wooley joined soon after to help with production and the soundtrack, and they’ve been developing new films and live shows ever since. In creating his stop-motion animation pieces, Klein thinks about Johanes Kepler’s belief that geometry existed before and served as a model for the creation of the universe. He’s fascinated by space (he’s planning a trip to Joshua Tree in April to see Saturn’s opposition), as well as the fundamental principles of math and science. Though he admits he struggled with geometry growing up, “it’s vital for planning and timing the work I do.” Expect Goodnight Billygoat’s performance at TEDxConcordiaUPortland (now known as TEDxMtHood) to be a fantastically cerebral experience, though expect it to also be incredibly entertaining. Their art is something to get lost in, to enjoy, and to feel good about. An exciting group of speakers to be sure! Our next group of speakers will be announced Saturday, January 28th , the same day tickets go on sale for TEDxConcordiaUPortland (now known as TEDxMtHood) 2012.