The rhetoric artists use when they talk about their creative processes is well-worn. We know about the ingredients of inspiration, imagination, expression, skill, emotion, and representation; we’ve heard about the muses (sometimes real and sometimes imagined), and we know that at some point the creative process involves sitting down and doing something until it becomes art. We know that what artists consider work is more like a state of being; they lose themselves to what it is they’re doing, surrendering to what positive psychologist Mihaly Csikszentmihalyi calls “flow.” 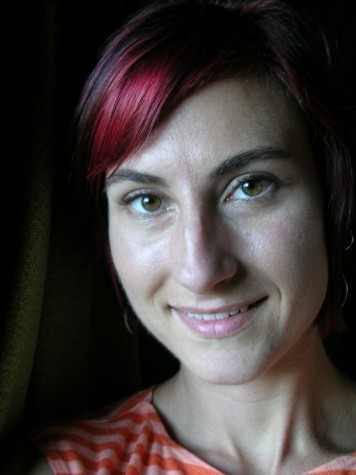 All of this points to what’s mysterious and ethereal about art, but none really captures that strange and magical way in which an idea or feeling is transformed into something tangible.

Forming the backdrop of this year’s TEDxConcordiaUPortland (now known as TEDxMtHood) stage will be a work of art that stems from our theme of “Becoming Extraordinary.” Award-winning artist Crystal Schenk has designed a sculpture that will resemble the Aurora Borealis, which this year is expected to be in peak form due to the magnetic influence of the eleven-year solar cycle.

“It is remarkable and poetic that the magnetic fields and solar storms of the sun have such a beautiful impact on our planet’s atmosphere. I wanted to create something that both references extraordinary natural beauty but was also relevant to our time.”

One of nature’s great mysteries, the extraordinary glowing patterns of the Aurora have long captured the imagination of those who’ve witnessed them. The sense of wonder that arises in the viewer soon gives way to the sense that there is still a lot to know and discover out there. If they hold onto this wonder and bring it down to earth, there’s a chance that it might be changed into some else entirely, an idea worth spreading.

In creating this piece, Crystal followed a familiar process.

“Often my work starts as a lingering feeling or impression that defies words and imagery. I spend a long time meditating on this sentiment, turning it over and over in my mind like a worry stone. It is important for me to hunt down the perfect metaphors and representations until I find one that resonates.”

As all of our speakers give the talk of their lives, their ideas will be illuminated by the shifting and shimmering lights of Crystal’s work. The magic of their stories will be enhanced and we’ll see how ideas can be created, stretched out, reached towards, and grasped.