Coava Coffee owner and founder Matt Higgins goes to great lengths to find excellent coffee, traveling to Latin America and the Horn of Africa searching not just for the right beans but the right farms to work with. Compared to that, this latest TEDxMtHood Adventure might not seem all that adventurous; but it was definitely informative and delicious. In a former garage just behind their Grand Avenue location, Coava barista and training leader Derrick Cisneros introduced a dozen or so coffee lovers to the process of “cupping,” a way to distinguish between coffee varietals. Three of Coava’s most popular coffees were lined up: Kilenso (Ethiopia), Gichuna (Kenya), and Remualdo Moreno (Honduras). First, the beans are ground, releasing the aroma to be sniffed. Next, hot water is poured over the coffee, which is left to steep. After a few minutes, Derrick took a spoon and broke the crust that had formed on the surface. This stopped the brewing process. Then he methodically scraped off the crust in each cup, and pronounced it ready to taste. Taking our own spoons we sampled each brew—slurping was recommended—and then were asked to judge each one by its sweetness vs. acidity and its body vs. its finish. Although none of the three was a clear favorite, they were all enjoyed.

Personally, one of the better aspects of this experience was my fellow adventurers. These were very astute and appreciative coffee lovers. They were familiar with various washes and roasting processes; they seemed to understand the difference between polyembryonic and monospermatic beans; and they were quite inquisitive, asking some good, thoughtful questions. For example, 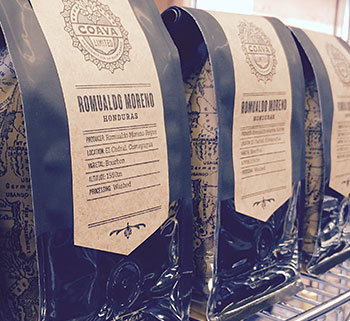 It was a couple of hours well spent, but BEST part of the adventure is what I took home afterwards—literally!— a bag of Remualdo Moreno I could enjoy the next morning.

Don’t forget: TEDxMtHood is on May 2 at Revolution Hall. Purchase your ticket today!