When you think pragmatic, what’s the first thing that comes to mind?

Chances are, when you behold a pair of fabricated thirty foot tall lilies, or a twenty seven foot steel sunflower that’s traveled the country, the word pragmatic isn’t at the top of your list. Yet for Chad ‘Fez’ Gaetz, large scale sculpture artist and creator of ‘Lillium Gigantum’ and “Helianthus Enorme,” to name a few, much of the creative process is rooted in the poetics of pragmatism. Looking at the relationship between imagination and practicality through his lens offers a glimpse into a world where fantastic dreams become achievable through dedication to the details of invention.

Fez’s first big art adventure was for a two month build in Portugal where he converged with a global community of creators making a temporary art-centric city. Called in to support the creation of a massive gallery environment and MainStage from bamboo, clay, steel cable and fabric, Fez quickly found that what was needed most on-site was the practical anticipation of who needed to communicate with who, what needed to be done when, and somebody who could operate heavy equipment at any hour. There, in an epicenter of imagination, amidst a dizzying diversity of talents, the capacity to ground all the elements into systems of manifestation made him indispensable.

Yet when he started dreaming his own pieces a few years later, he found that the fundamental initiation of the creative process was not an act, but a state. For Fez, the way to creation is opened by awe, as, to him, even awe is a function of practicality. The wonder at how earth manages to create a glacier, or the fibonaccian spiral of a sunflower’s spiraling head of seeds, the awe for the super-pragmatic complexity of creation, urges him to come closer to those forms by creating in their tutelage.

His initial experience of the way-opening sensation of a fully transformative awe was upon his first encounter with a glacier. Beholding Laughton glacier, just outside of Skagway, Alaska where he worked as a backcountry guide before ever dreaming of being an artist, he was stunned, mind-blown, and viscerally captivated by the miles long, meters thick 10,000 year old ice. As he grew in curiosity and attentiveness to the earth’s creative capacity to create, his guiding journey expanded, leading him onward as an Expedition Leader in the Canadian High Arctic and Antarctica. In these far northern and southern realms, ice giants of many shapes and forms would continue to astound him and increase his appreciation for nature’s own sculptural prowess.

The son of a builder and a florist, student of ice giants, it’s only natural that Fez became a builder of giant flower sculptures as big as icebergs. After creating his first work, he engaged the spirit of camaraderie and collective endeavor, and he founded Alchemy Arts Collective. Alchemy Arts empowers groups of artists to work together to achieve more than they ever could alone, to amplify and share the awe, and work together to get super-pragmatic.

As TEDx artist in residence of the seventh annual TEDxMtHood event on October 7, 2017, Fez is thrilled to bring a stage set that speaks to the alchemical virtues of collaboration, exploration and environment. 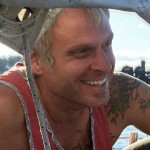 Chad 'Fez' Gaetz is a Portland, Oregon-based artist best known for his large scale interactive works. He has created his own niche designing sculptures and environments which amplify natural forms. His favorite media include steel, lumber, fabric, rigging and LED illumination.